Just beginning in video?  Don’t know how to start comparing your video editing options?  Want software that’s easy to use and gives you stellar results?  We created this guide to help.  We’ll look at two popular, affordable choices for people starting their journeys into creating video to share with family, friends, and the world – VEGAS Movie Studio and Filmora9.  Join us as we compare features and take an honest look at the pros and cons of both.  Read on to find out more!

Here’s a quick look at the features of VEGAS Movie Studio software and Filmora9 software side-by side:

What Are the Most Important Aspects When Comparing VEGAS Movie Studio and Filmora?

Let’s take an in-depth look at some of the features from the table and see how they really compare between
VEGAS Movie Studio and Filmora9.

These days, the options for software include not only outright purchase prices (known as perpetual licenses), but many programs are available at a low monthly or annual subscription fee.

A flat purchase price will be a lot more than a monthly fee at first, but monthly fees may add up to the purchase price. (Annual subscription fees may work out to a lower price than monthly payments.) Also, with a flat fee, the software is yours to keep and you don’t lose it as you would if you stop your subscription. But subscriptions also allow you to access software you otherwise might not be able to afford, or allow you to use software temporarily for a project.

A subscription plan also often means that you get an update to new versions and features for no extra charge, whereas you’ll usually pay extra if you upgrade your perpetual license to the next version.

These features are about the editing experience, and how fast, easy, and intuitive it is to work within a program. A great editing app is easy to work with and lets you focus on your creativity rather than your tools. The last thing you want is a program which makes things harder than they should be. 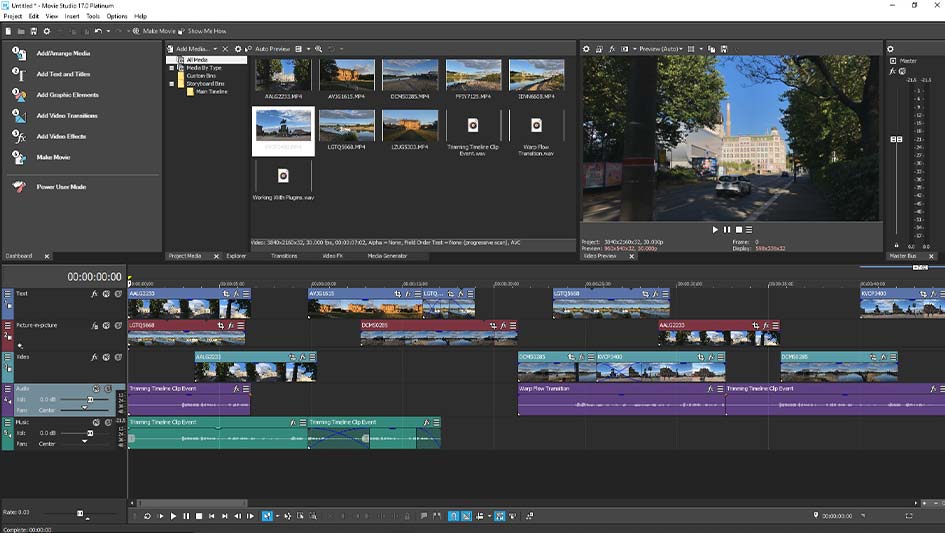 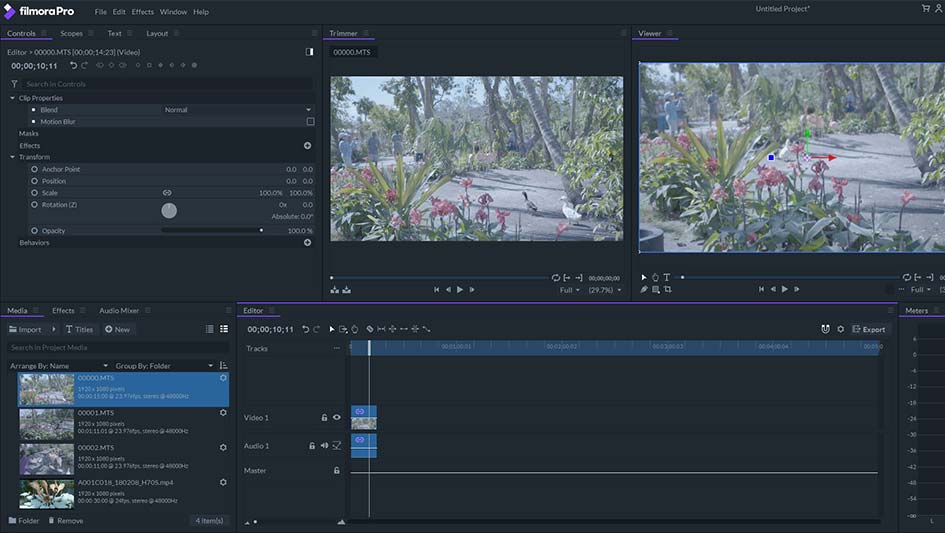 The way you work in any app.  Does the workflow help with productivity, or does it hinder you, making things more difficult or slower than it should be?

Additionally, VEGAS Movie Studio features the Guided Video Creator, which takes you step by step through the creation of your first videos.  When you feel comfortable, you can take full control.  Filmora9 includes a brief tutorial when you open the software for the first time, but it doesn’t have a guided creator.  Its workflow is very different from most other video editors and only lets you do things in certain ways.

A pro editor needs a flexible and quick timeline, that will take any file format, can be arranged however the editor wants, will play back video smoothly without many dropped frames, and won’t bog down the editor with difficult-to-use tools or unnecessary steps.

Designed for speed and flexibility, the VEGAS Movie Studio timeline enables the editor to work the way they want. The editor can arrange and rearrange tracks at will and mix and match file formats on the same tracks. Simple touches like automatic crossfades on overlapping video make defining transitions almost instant, instead of having to pull the “handles” common in other editing apps.  You can also drag media from folders into the Project Media window or directly to the timeline instead of going through an import process, saving you lots of time.  The Filmora9 timeline allows you to drag media from the media pool to the timeline, but doesn’t allow true-drag-and drop from folders into either the media pool or the timeline, forcing you into an import process.  When you drag media to overlap on the timeline, the new clip will overwrite any portion of a previous clip the new clip overlaps instead of creating an automatic crossfade between them.  You then need to re-trim existing clips to recover the parts overwritten or to create a transition. 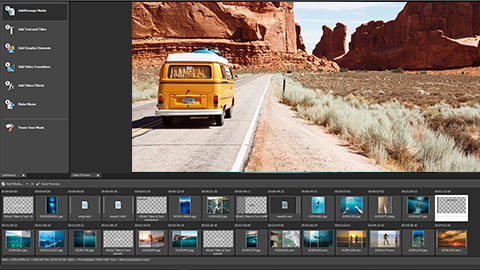 Different editing tasks, like cutting on the timeline, adding effects, adding transitions, and export require different sets of tools.  Mode-based workflows give you different interface configurations highlighting the tools you need for the task at hand.

One of the first steps in the editing process involves figuring out a rough cut.  Storyboards make this a lot easier by letting the editor select, arrange, and experiment with the order of clips in the project’s media pool just like arranging photos on a desk.  It’s a quick and intuitive way to make an initial rough cut before ever going to the timeline.

Useful Tips: Storyboard Creation – craft your vision like the pros 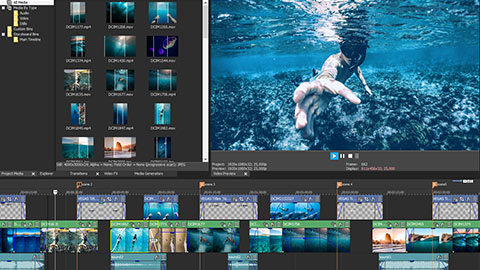 Summary: Guided Video Creator feature will walk you through your first video creation and intuitive design of VEGAS Movie Studio makes it easier to learn.

The ability to correct and grade color is one of the fundamental functions of editing.  Even a “black and white” project requires adjustments and creative use of contrast and light and dark. You want an editing app which gives you superb control over the color and lightness and darkness of your images. 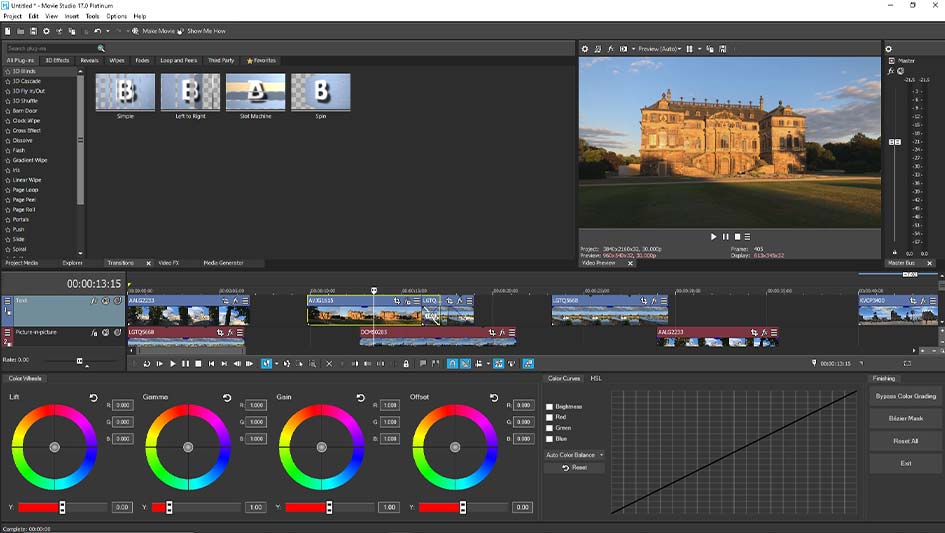 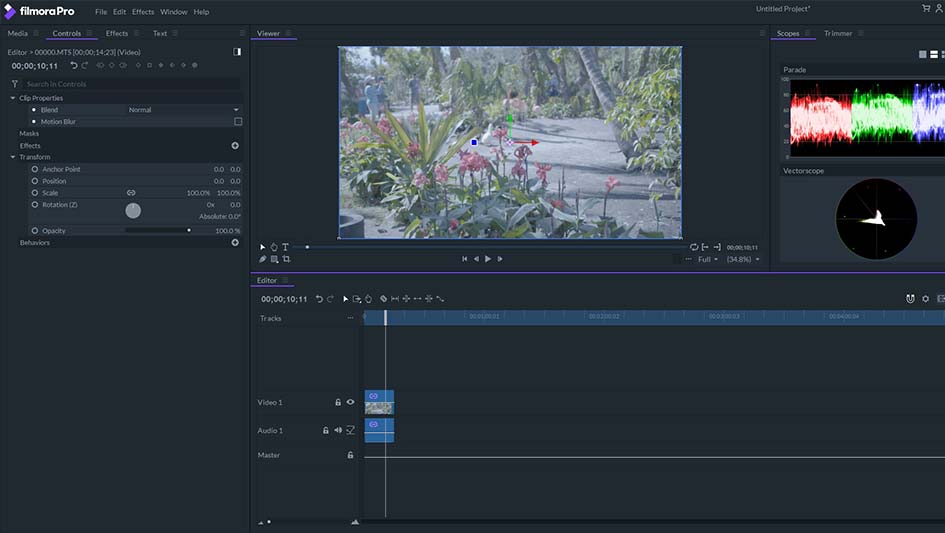 A good editing app gives you an array of tools to correct and control your color to fix problems and also to create stylistic looks to enhance mood or atmosphere.

VEGAS Movie Studio gives you tools to adjust and rebalance color so you can correct problems, unify your looks, or create styles.  VEGAS Movie Studio Platinum also offers the Unified Color Grading panel, which gives you curves, HSL adjustment, color wheels, and other tools right at your fingertips in a single panel.  Filmora9 offers basic tools for adjusting and rebalancing color for fixing problems and creating styles.

Useful Tips: A Guide to Color Grading Your Video With the Powerful Unified Color Workflow 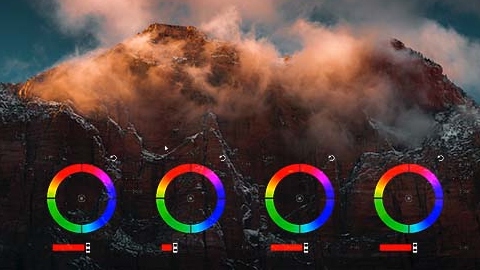 While beginner-level software tends to offer only basic color-correction tools, they still include filters for achieving many popular looks.

VEGAS Movie Studio offers an array of popular film-style looks for such projects as crime dramas, love stories, sci-fi adventure, and more, and you can adjust the strength of these filters to your taste.

Filmora9 also offers adjustable film-style looks filters, plus a set of 3D LUT filters, but does not offer true import of LUTs.

How you apply filters to your footage can make a difference in your editing efficiency.

In Filmora9, filters go onto the video track(s) above your media, so they are not directly applied to the clips themselves, but affect any media (or other effects and filters) under them.  If you move a clip on the timeline, you can lose the effect, but in some cases it makes it easier to apply the same effect to multiple clips.

Summary: Featured also in VEGAS Pro, Unified Color Grading panel ensures you have every tools you need at your fingertips.

Modern productions require a robust set of tools to produce video effects, not just for scenes like space battles or superheroes in flight, but for all the image sweetening you never even notice.  Look for an NLE which gives you incredible VFX capability without ever leaving the timeline.

Slow motion is a bedrock effect for adding drama, tension, or excitement to a scene. Some of the best slo-mo effects allow the ramping of speed down and up for spectacular temporal transitions.

VEGAS Movie Studio lets you manually change the speed of a clip; just enter the value into the media properties.  VEGAS Movie Studio Platinum offers Optical Flow Slow Motion, which analyzes footage and creates new frames in order to get glass-smooth slow motion in footage of any frame rate. Filmora9 also lets you enter the playback value to control a clip’s speed. 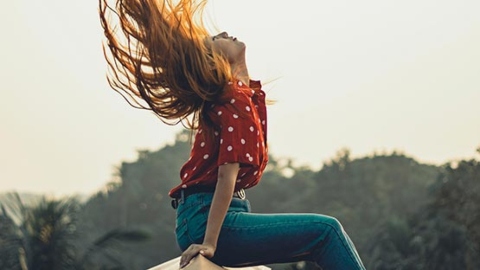 Ever have to deal with shaky footage? It’s not always the end of the world.  With video stabilization, you can often fix wobble and get smooth video. 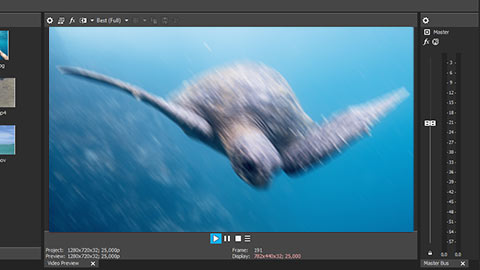 One of the most time-honored VFX techniques around, Chroma Key lets you remove a solid-colored background and replace it with whatever you want, letting you put your actors on other planets or devise epic space battles, or combine with CGI to create a virtual set.

They say sound is 70% of what you see.  Great visuals not only need great sound, if you don’t have great sound, your video won’t be great.  You need good audio tools to give you the sound your visuals deserve. 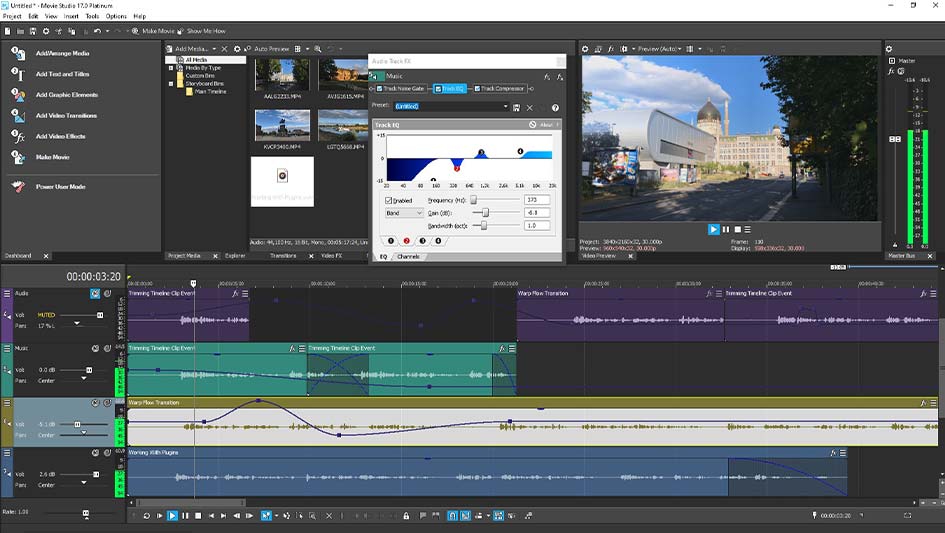 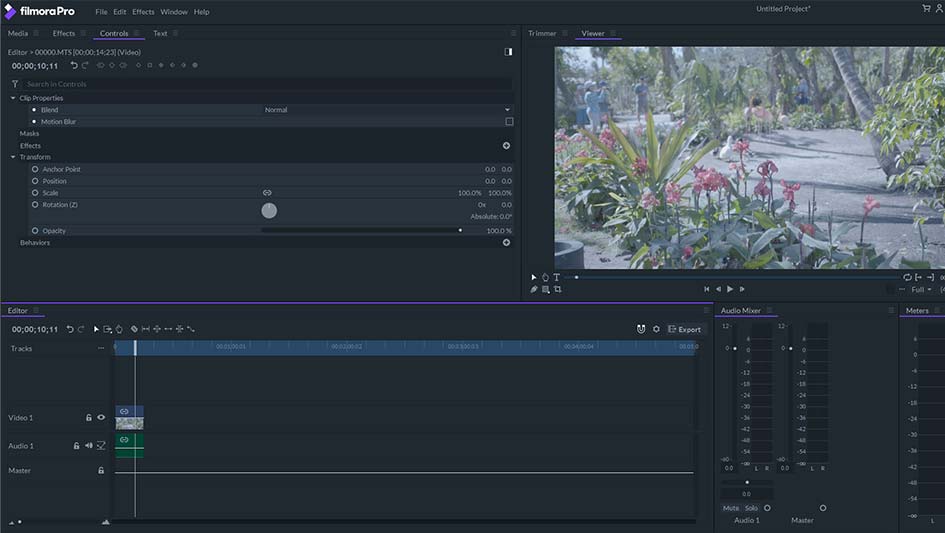 In order to achieve great audio, you need meters so you can objectively determine the volume of your sound to make it consistent throughout your program, instead of relying only on your ears.  You also want warnings if your audio is too loud and may distort.

VEGAS Movie Studio gives you professional meters for each channel of stereo sound, visible while you edit and play back your program.  VEGAS Movie Studio Platinum offers meters on each audio track.  Filmora9 only provides meters while editing audio clips.

Great sound requires a set of effects tools for a robust soundtrack.

VEGAS Movie Studio puts a number of customizable audio effects and tools at your fingertips, like EQ and compression, which you can apply to your audio for sweetening and special effects.

Filmora9 offers a library of sound effects, but no tools for enhancing your audio.

Envelopes let you control audio properties like volume and stereo panning on the fly, creating keyframes so your audio changes dynamically as the timeline plays.

VEGAS Movie Studio leverages automation envelopes for both volume and stereo panning, letting you easily define how your audio plays back.  Filmora9 lets you keyframe audio volume, but only manually.

VEGAS Movie Studio Platinum now includes SOUND FORGE Audio Studio (worth $59.99), a comprehensive audio editing and mastering solution for all digital audio editing requirements, within a seamless round-trip session right from an even in the Movie Studio timeline. Also included in SOUND FORGE Audio Studio, is Ozone 9 Elements plug-in from iZotope making Movie Studio a complete toolkit for video editing as well as sound editing. Filmora9, despite not being backed up by a renowned audio software, is equipped with multitude built-in audio editing capabilities, such as music beat detection, audio denoise, EQ with presets and many more. 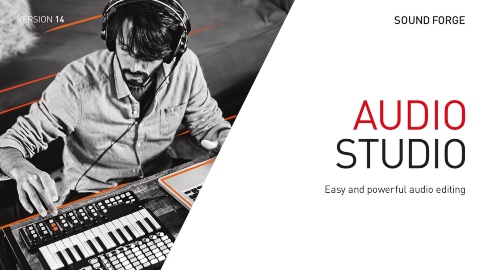 Summary: Not only for video editing, VEGAS Movie Studio is packed also with a powerful audio editing and mastering capabilities.

Today’s video demands a wide variety of export format options, and the ability to render your projects quickly. 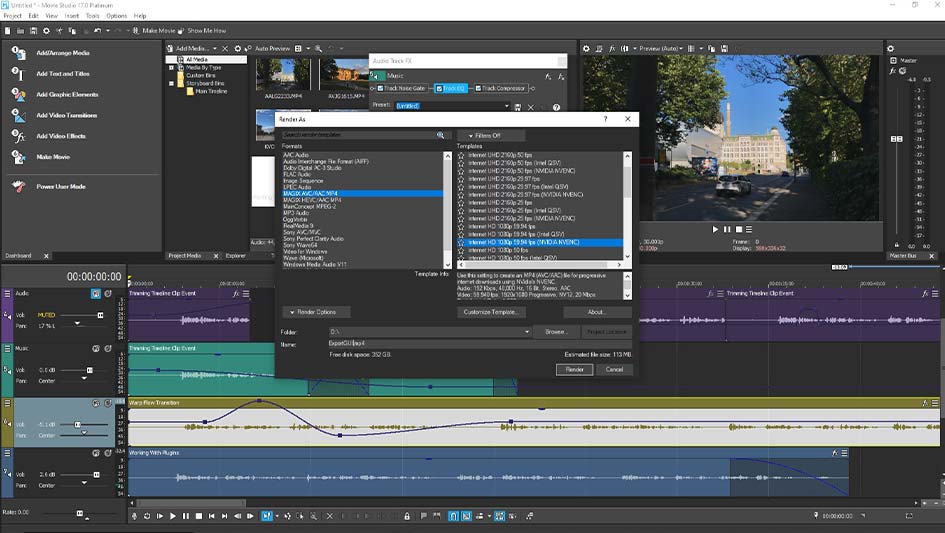 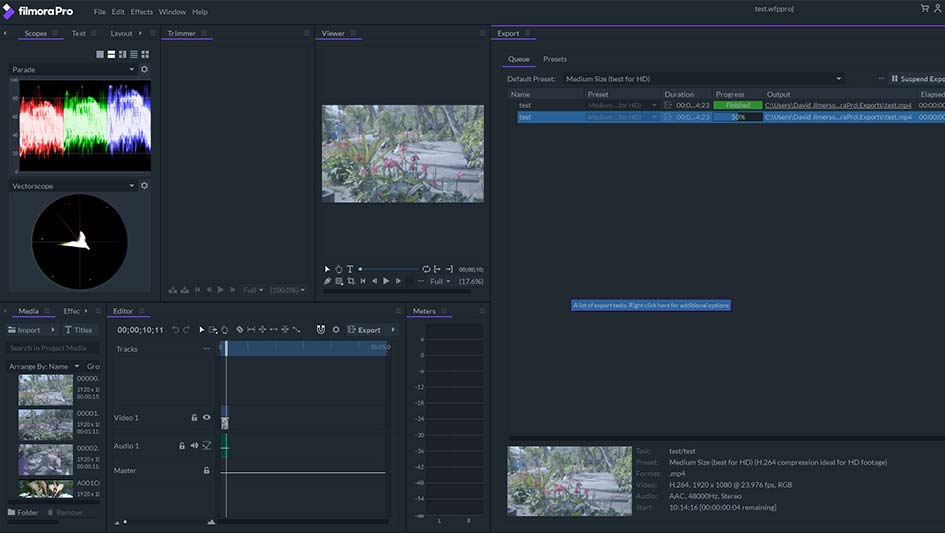 Delivery of video these days can be in a number of different formats.  Some of the most common are AVCHD, MP4, and H.264.  A robust editing app gives you the choices you need to deliver the formats clients and platforms require.

Both VEGAS Movie Studio and Filmora9 offer export to a wide variety of formats, with customizable templates.

Export and rendering take time, especially from complex projects. If you can leverage your graphics card to help carry some of the load, so much the better.

Filmora9 also leverages the GPU for rendering and encoding video.

Instead of forcing you to manually export to platform requirements and then manually upload the file, VEGAS Movie Studio makes it much easier to cut through all the red tape, exporting your project straight from the timeline to the correct format for YouTube, Vimeo, and Facebook, and then automatically uploading the video to your account.

Conclusion - Which Software is Right for You?

With everything above in mind, here are a few thoughts on the pros and cons of
VEGAS Movie Studio and Filmora9, and who we’d recommend each for.

We believe VEGAS Movie Studio is an excellent
Filmora9 alternative

Try a Free Trial version and find the perfect video maker for your video editing needs. 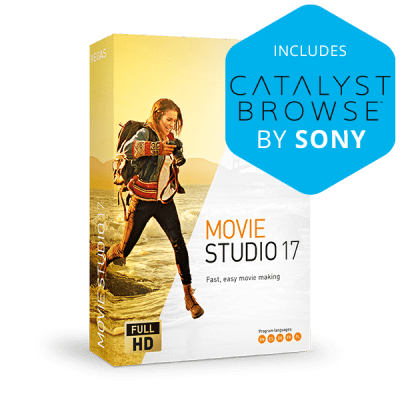 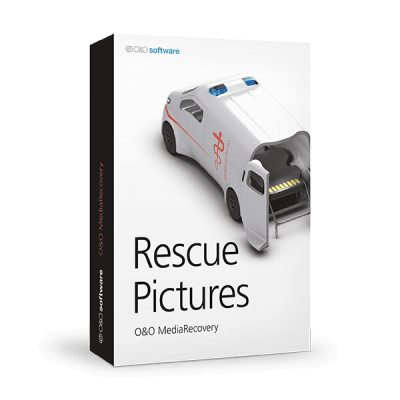