SLOWING DOWN AND SPEEDING UP VIDEOS IN VEGAS PRO

Sometimes you just need a change. In this case, we mean a change in speed! Many movies utilize slow motion for dramatic effect or to make action sequences cooler and more intense. Others use fast motion to give the impression of time passing or for goofy comedy like old-style Keystone Kops movies. Whatever the reason you want to change your playback speed, VEGAS Pro has you covered with a robust toolset for slowing or speeding up video. You can go even further by making time runs backwards for playful and dramatic effect.

In this tutorial, we’ll first cover some general concerns about changing playback speed. Then, we’ll get into the tools available in VEGAS Pro. We’ll follow these steps:

When we’re done, you’ll have a great understanding of how to slow or speed up footage in VEGAS Pro.
Read on to find out more!

When slowing or speeding up footage, it’s always a good idea to remember what video is. Video is a group of still pictures played back in rapid succession to give the illusion of movement. When slowing or speeding up footage, you change the rate at which the pictures are played back, so it can have big consequences on the smoothness of the motion. 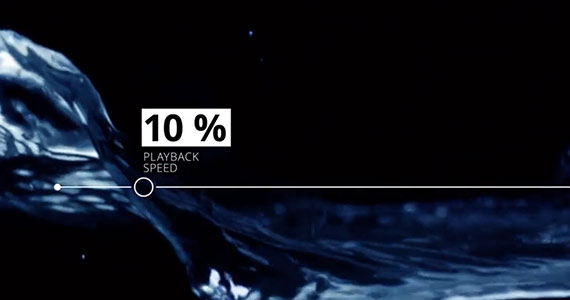 When you slow footage, you’re slowing the rate of pictures running past your eyes. Each individual picture stays there longer, so the slower you go, the more of a chance that the lingering pictures might start to look staggered and choppy. This is especially true of slower frame rate footage like 24 or 25 fps (and to a lesser extent, 30 fps). It’s often difficult to get good, smooth slow motion from lower frame footage. Higher frame rate footage like 50 or 60 fps or higher has less of a chance of seeming choppy, depending on how much you slow it, but it also has the potential for the same thing. 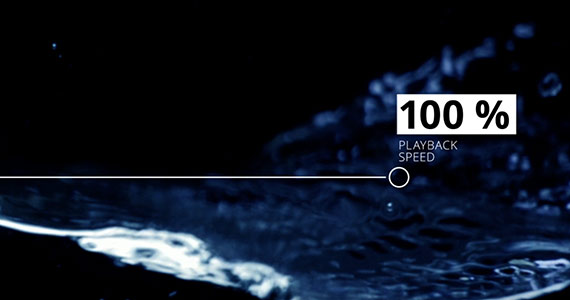 Speeding up footage is much less of a concern. Many professional-level cameras offer variable frame rates, meaning you can create slow motion or fast motion directly in the camera and there’s no need to slow it down or speed it up in post. If you’re dealing with it in post, you’re most likely dealing with normal footage of a standard frame rate, like 24p or 30p or 60p, and you’ll have to keep the above concerns in mind.

The best way to achieve a speed change, especially slow motion, is to fit the new effective frame rate of the footage evenly within the frame rate of the project. In short, you want the new speed of the footage to result in whole frames being displayed. A standard method of achieving good, smooth slow motion in a 24 fps project is to shoot 60 fps and then slow it down to 24 fps in post. This works well because if you slow 60 fps 2.5x, or 40%, the effective frame rate is 24p. So each 60 fps frame matches a 24 fps frame on the timeline, and there’s no need to drop frames, interpolate frames, or resample frames. Each frame is used whole, so the result is glass-smooth slow motion. The same is true if you slow 30 fps down to 80% playback in a 24 fps project. The result is milder slow motion, but it’s also perfectly smooth.  It’s definitely much smoother than you would be able to get slowing 24 fps footage.

Most of the methods for changing speed in VEGAS Pro involve resampling frames. Simply put, VEGAS Pro analyzes and blends existing frames for intermediate steps between frames. It makes new frames by blending old ones together. This can result in double-images or ghosting in frames, but it’s necessary to achieve changing playback speeds.

If you use the method above of slowing 60 fps or 30 fps footage in a 24 fps project, you don’t want resampling, you want whole frames. So in that instance, disable resampling. More on that in a bit.

Interpolating frames means creating whole new intermediate frames as if they were recorded by the camera in the first place. There’s no blending of frames, so there’s no double image or ghosting, and each frame is crisp. As we’ll see later, the Slow Motion effect utilizes this technique for smooth slow motion.

VEGAS Pro offers a number of ways to speed up or slow down footage. We’ll take them in order of sophistication.

The simplest and most precise way to speed up or slow down motion is to change its playback rate in the Media Properties. This method makes it especially the kind of smooth slow-motion we described above, as we’ll see in a moment.

✓ Drag a video clip to the timeline. When the pop-up box asks if you want to conform the project properties to the media properties, click Yes.

✓ Click the up or down arrows next to the Playback Rate value. The playback rate changes in increments of .001. This is useful if you want to make very subtle changes in speed, such as when you’re using PAL-framerate footage in an NTSC-framerate timeline, and need to conform the footage just enough to fit. For noticeable speed changes, an increment that small could take all day, so just type in a number. For example, 2.500 speeds up footage 2.5x, while .250 cuts the playback to one quarter speed, or a 4x slowdown. The maximum speed value allowed is 4.000, or a speedup of 4x, and the slowest value allowed is .250.

Changing the Playback Rate, you can speed up or slow down the footage by as much as 4x.

Choose 4.000, speeding up the Playback Rate 4x. On the timeline, note three things about the video event.

✓ Note also that the audio event is unaffected. The audio did not increase speed and VEGAS did not loop it. Click the left edge of the video event and press Play. The video plays back at 4x speed, but the audio plays back at normal speed and is not synced to the video. Click Ignore Event Grouping.

✓ Right-click the media event and choose Properties. Next to the playback rate, a box appears which says Conform to Project Frame Rate. Click the box.

The Playback Rate automatically changes to 0.400, or 40% speed, bringing each frame of the media event in line with the project frames, creating the glass-smooth slow motion we discussed above. Click Disable Resample so the original frames are preserved and not resampled.

✓ Click the left edge of the video event and press play. The 60p footage now plays back at 40% and each frame is preserved whole, conforming each 60p frame to each 24p frame of the timeline, and the result is glass-smooth slow motion.

We used CTRL-Trim above to conform the audio to the video speed change, but we can also use it to change the speed of the video and audio events at the same time.

✓ Start a new project and drag the same clip to the timeline as in our first example. Make sure Ignore Event Grouping is deactivated.

Find the halfway point of the video event. Place the timeline cursor at that point and press M. An orange Marker appears on the timeline.

✓ Right-click the video event and choose Properties. The Playback Rate value is now 2.000, because you have compressed the entire media clip into half the time.

✓ CTRL-Trim is a quick and easy way to change playback speed, though it is difficult to know exactly how much you’ve changed speed while dragging. Once you’ve reached the limits of the Playback Rate change, 4x in either direction, trimming stops, and you can’t move the edge of the event any further.

Velocity Envelopes offer an even greater range of speed change than changing the Playback Rate or CTRL-Trim. You can use a Velocity Envelope to increase speed to 1,000%, or 10x, or slow speed to as little as 1%. You can also change playback speeds within the same event, so you can ramp up speed and slow back down as many times as the length of the event allows.

✓ Drag a new clip to the timeline. Right-click the video event and choose Insert/Remove Envelope>Velocity.

A green line appears near the bottom of the video event, with a point on the left edge of the event. This is the Velocity Envelope. Hover the mouse cursor over the point. It turns into a hand with the index finger pointing to the point. A pop-up displays the timecode where the point is, and the playback speed assigned to the point. Right now, the playback is 100%, normal speed.

✓ Move the index finger to the envelope. An up/down arrow appears next to it. Click the line and drag it up.

The flat Velocity Envelope means the playback rate is uniform for the whole duration of the clip, but we can set variable speeds. Set the original point back to Normal Velocity.

✓ Right click the envelope somewhere to the right of the point. Choose Add Point. A new point appears on the envelope. Hover the cursor, and the display tells you the timecode value for the new point and also its playback velocity, which is 100% at default. Drag the point up and down and the playback rate changes. Hold CTRL as you drag to prevent the point from moving left or right. Holding CTRL also slows the rate of drag, letting you see more precise increments as you drag, allowing to you stop on a very precise value. Stop at 300%, or 3x playback.

✓ Click the left edge of the video event and press Play. The clip starts at normal velocity, but as the timeline cursor runs through the enveloped, playback speed ramps up until it reaches 300% at the second point. The rest of the clip plays back at 300%.

Add more points and assign different values. The video playback speed ramps up and down according to the playback speeds you set.

The audio event is not affected by the Velocity Envelope, so it will play back as normal, out of sync with the video. Most of the time, simply delete the audio.

Unlike the other methods of slowing footage, which repeat frames or blend existing frames, the Slow Motion effect generates new frames. It interpolates the positions of moving objects and creates whole new intermediate frames. The result is better, smoother slow motion.

✓ Create a 24 fps project and drag a 24p clip to the timeline. Click Slow Motion in the Video FX window. Drag the Default preset thumbnail and drop it on the video event. The Video Event FX window opens and the Slow Motion controls appear.

✓ Click the Quality drop-down menu. Choose Coarse, Medium, or Fine, depending on how much movement is in the clip and how much you want to slow it down. Click Analyze Motion. The effect analyzes the motion in the clip. It could take some time if you chose Medium or Fine quality, depending on the length of the clip.

✓ When it completes the analysis, more controls open. Choose the Method from the drop-down menu, either Optical Flow or Morph. Optical Flow is the standard choice, but depending on the footage, you may find better results with Morph.

Slide the Playback Rate slider to the left to slow motion to the desired value. A .60 value means 60% playback, and so on. You can also type in the value directly.

As with the Playback Rate and CTRL-trim, the audio event is unaffected and still plays back at the normal rate. In most cases, delete the audio.

If you like the results, great! If not, click Clear Motion Data and start the process again.