Create Your Own World with Color Filters & Effects

Making spectacular videos involves more than just trimming video and writing titles; adding visual effects and filters for artistic and dramatic flair is at the very heart of video and film storytelling. Apply color filters for mood and atmosphere, Add crazy warp effects to create a surreal world. Make your video look like old-time film. Introduce lens flares, light rays, and glows. It all depends on your imagination and your creative needs. VEGAS Pro offers an exciting library of visual effects and filters just waiting to be put to use in your next project. In this tutorial, we’re going to explore exactly how to add them to your video.

Step 2: Drag Your Media to the Timeline

Step 5: Add Effects to a Track

Step 7: Add Effects to the Video Bus
(in VEGAS Pro)

Now, let’s take a deep dive into adding effects and filters to your video in VEGAS Pro!

ADDING EFFECTS AND FILTERS TO YOUR VIDEO

To find the effects and filters in VEGAS Pro, go to the Video FX window. Some effects are true filters, changing the color characteristics of video in specific and artistic ways. Others are effects which manipulate the image in other ways such as adding borders or cutting out parts of the video in specialized shapes. Still others add effects which squeeze or stretch the video. And even others do much more.

All filters are effects, so when we discuss adding effects, it includes any of the filters offered in VEGAS.

Let’s explore in detail how to add effects to your video! 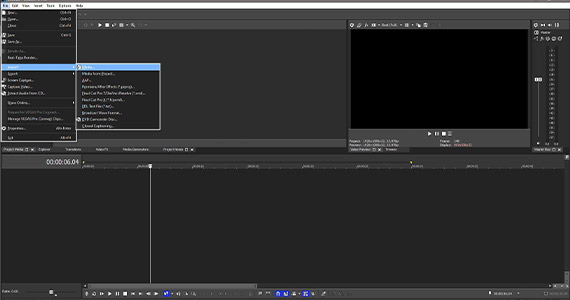 First, we need to import some media so you have something to apply effects to.

✓ Navigate to the folder containing the media you want.  Select the media file, then click Open.

The media file now appears in the Project Media window.

Step 2: Drag Your Media to the Timeline 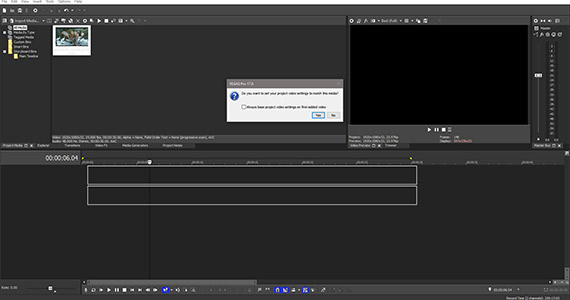 ✓ Now, drag the media from the Project Media window to the timeline.

A new video and audio track will be created. A pop-up box will ask if you want to set your project settings to match the media. Click Yes. 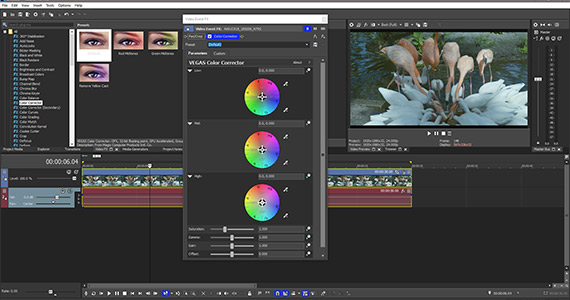 Let’s start with the easiest way to apply an effect.

✓ Drag an effect from the Video FX window and drop it on the event in the timeline. The effect is applied and the Video Event FX window opens, displaying the effect controls. You can then choose from different templates for that effect, or you can make manual adjustments.

✓ For another way to add an effect to an event, click the Event FX button on the event. If the event has no effects applied, the Plug In Chooser – Video Event FX window opens. The window displays a list of available effects. Click on an effect, and then click Add. The effect name appears in a small box at the top of the Plug In Chooser window.

✓ Click on other effects, and click Add after each one. You can add the one effect only, or you can add more effects. The additional effects’ names appear in small boxes at the top of the window, now forming an effects chain. An effects chain is like a stack of effects, with each added effect overlaid on top of the previous effects. The order of effects can matter to your visual results, so you can slide the different effects around in the effects chain. Effects further to the right are overlaid on top of the previous effects.

✓ Once you’re satisfied with the selection of effects, click OK. The effect or effects are now applied to the event, and the Video Event FX window opens, displaying the effects controls. There is also an effects chain at the top of this window. Click on each effect in the chain to open the controls for that effect. You can also change the order of effects in the chain as desired.

Add FX filters at the Media, Track, and Project Levels

We’ve added FX to an individual event on the timeline. But we can add effects at several other different levels, too. 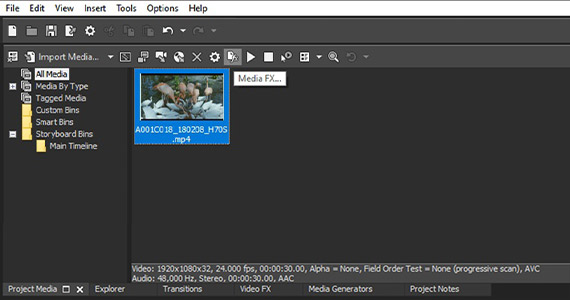 Effects added at the media level are at the lowest level of effects, so any effects applied at the event, track, or project levels are overlaid on top of the media FX.

✓ To add effects at the media level, select the media file in the Project Media window.

✓ As with applying effects at the event level, choose your effects and click Add. When you have added your effects, click OK. The Media FX window opens, displaying the effects controls.

To view your effects, you must have an instance of that media contained in a timeline event so that you can view it in the Video Preview window. Effects applied at the media level will not be displayed if you view the media in the Trimmer window.

Step 5: Add Effects to a Track 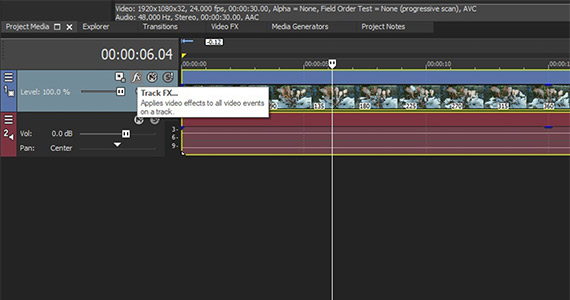 ✓ Each track has a Track FX button. Click it, and the Plug In Chooser – Video Track FX window opens. 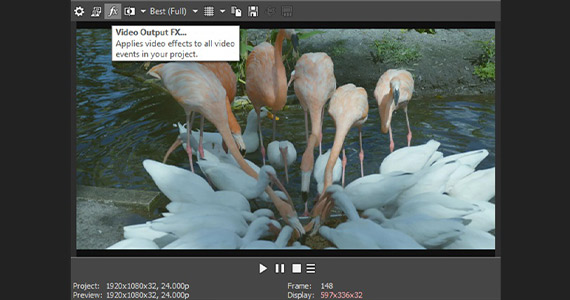 ✓ As before, choose your effects, click Add, then click OK when you’re finished. Effects applied in the Preview Window are then applied to the entire project, all tracks, all events.

In VEGAS Pro, there’s additional level where you can add effects -- the Video Bus level.

Adding effects at the video bus level works a lot like adding them at the project level; the effects will apply to all tracks and events on top of any effects added at those levels. The difference in using the video bus, though, is that you can control the entire project as you would control a video track.  Not only can you add effects, you can add envelopes, fades, and track automation, which will then apply to the entire project.

✓ To add effects to the bus, go to View>Video Bus Track. When enabled, the Video Bus track appears at the bottom of the timeline. It looks very much like a video track, but with slightly different control buttons.

Unlike with other levels, you can’t simply drag an effect from the Video FX window to the Video Bus track.

✓ Click the Video Output FX button. The Plug In Chooser – Video Output FX window opens. From there, follow the same steps as you did applying effects at the project level.

Those are the many ways to apply effects and filters to your video in VEGAS Pro.
Experiment and have fun!