THE ART OF SPLIT SCREEN CREATE YOUR VIDEOS QUICKLY AND EASILY

Whether it’s for dramatic effect, for providing examples of a point, for showing what two or more people are doing at the same time, or for countless other possibilities, a split screen effect can be a powerful tool for telling a story. VEGAS Movie Studio Platinum offers a great way to make your own split screen videos quickly and easily and customize them to perfection with the Crop effect.

Useful Tips: Create a "Living" Poster Like in Fantasy Movie

And show you how easy it is to make split screen videos in VEGAS Movie Studio Platinum. Read on to find out more!

Let’s go step by step through the process of creating split-screen videos!  We’ll not only be able to make videos where the screen is split half-and-half, we’ll also redefine the parameters for all kinds of different combinations. 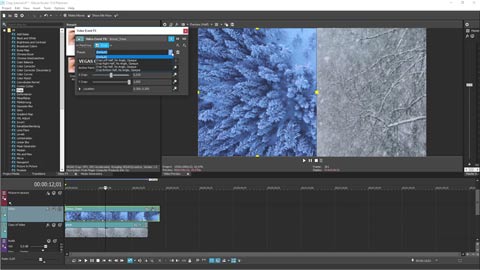 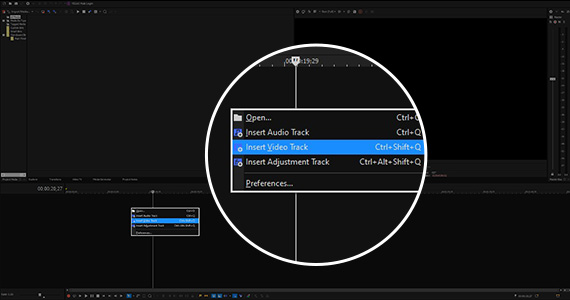 A split screen video is really made up of at least two different videos, with one visible in one portion of the screen and the other visible in another (often left-side/right-side or top/bottom).  To create that effect, you need two separate videos on the screen at the same time. A video track can only hold one video at a specific time, so you need more than one track to have both videos visible simultaneously.

When you open VEGAS Movie Studio Platinum, the timeline is already populated with a set of video tracks, labeled Video, Picture In Picture, and Title. The idea is that your main video goes on the Video track. The other tracks are meant for Picture In Picture and text overlays, which are different from what we want, so let’s create a new track.

✓ Right-click the Video track.  Choose Duplicate Track. A new track, labeled Copy of Video, appears under the original Video track.  You can rename the track anything you want, but you don’t have to.  Let’s leave it as it is. 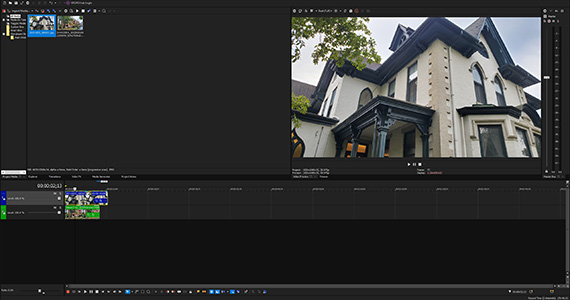 ✓ Choose the video clips you want to display in the split screen.

✓ Drag one to the Video track, and drag the other one underneath it to the copy of the Video track.  Make sure the video events take up the same place on the timeline so one is directly above the other.

To achieve a split screen effect, you need to be able to see the video underneath, too, so now we need to apply the Crop effect. 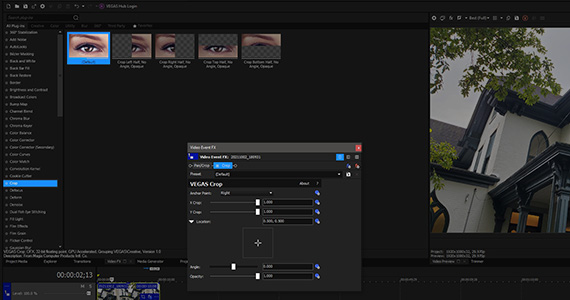 You’ll also see in the Video Preview window that the image now has yellow dots at the center of the top, bottom, left, and right edges of the image.  Those are control points indicating that the effect is active and you can now adjust it to make your split screen. 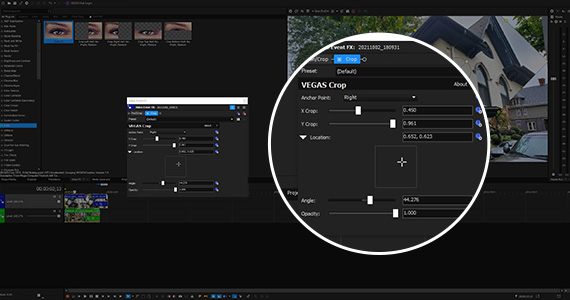 ✓ First, drag one of the yellow control points toward the center of the Video Preview window. As you do, you trim off part of the upper video and reveal the video below. In that respect, you’ve already created a split screen video.

But the controls in the Video Event FX window offer more precision than just freehand dragging.

✓ Click the Preset drop-down menu. At Default, the entire image from the video in the upper track is visible, so there is no split screen.  The options in the drop-down menu let you make quick half-and-half split screens.

✓ Choose which half of the upper video to crop  out – the left half, right half, upper half, or lower half.

If you just want a half-and-half split screen video, you’re set!  But the controls let you define custom arrangements, too.

Using different anchor points and slider combinations, you create boxes of your upper video of various sizes of shapes. You can also always drag the anchor points directly in the Video Preview window.

You can also enter exact values into the X Crop and Y Crop controls.

Experiment with sizes and shapes, bring in more layers and videos, or add animation on your PIP and find the perfect split screen video effect for your project! 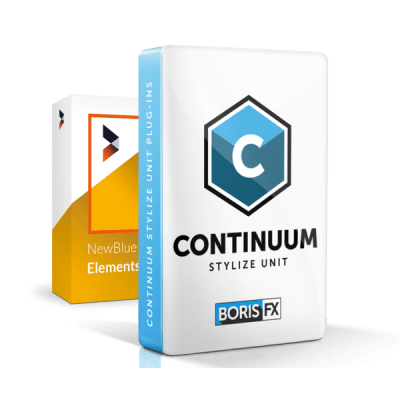